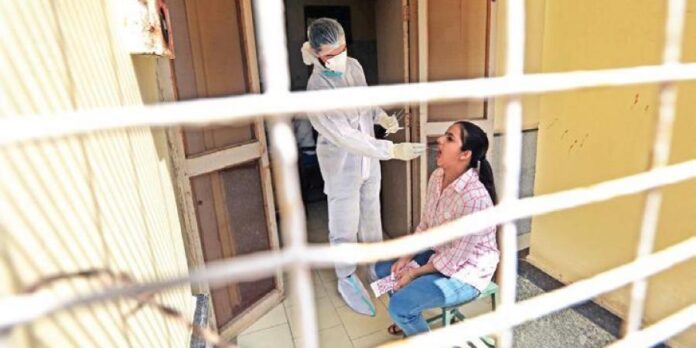 A total of 1,189 samples have so far tested positive for variants of concern of SARS COV-2 in India, the health ministry said on Friday as the country is witnessing a steep surge in COVID-19 cases. These include 1,109 samples testing positive for the UK variants, 79 for the South Africa variant and one sample for the Brazil variant, the ministry said.

April 15, 13,614 samples have been processed at the 10 designated INSACOG laboratories for whole genome sequencing (WGS), it added.

“Of these, 1,189 samples have tested positive for variants of concern for SARS COV-2 in India. This includes 1,109 samples with the UK variants; 79 samples with the South Africa variant and one sample with the Brazil variant,” the ministry said.

The coronavirus has been mutating and various mutations have been found in several countries, including the UK (17 mutations), Brazil (17 mutations) and South Africa (12 mutations).

“These variants have a higher transmissibility. The UK variant has been found extensively in the UK, all across Europe and has spread to Asia and America.

“The double mutation (two mutations) is another variant and has been found in several countries like Australia, Belgium, Germany, Ireland, Namibia, New Zealand, Singapore, the United Kingdom, the USA. Higher transmissibility of this variant is not established as yet,” the ministry said in a statement.

It said the RT-PCR tests being conducted in India do not miss these mutations as these tests target more than two genes.

The sensitivity and specificity of the RT-PCR tests remain the same as earlier, it said.

“The detection of these mutations does not change the strategy of management which remains to test, track, trace and treat. The use of masks remains as the most important shield to prevent the spread of COVID-19,” the ministry stressed.

It said the INSACOG guidelines were shared with the states again and they were advised to send samples for genome sequencing by also providing the clinical data of positive persons.

This will enable a great epidemiological insight into the link of the surge at various places to the variants as well as enable the INSACOG to discover other variants of concern, if present in the community.

Many states, including Maharashtra, Madhya Pradesh, Rajasthan and Kerala, are yet to share the data with the National Centre for Disease Control (NCDC), though Punjab and Delhi have shared the information, the ministry highlighted.

The Indian SARS-CoV-2 Genomics Consortium (INSACOG) is a network of 10 laboratories established in December 2020 for continuously monitoring the genomic changes of SARS-CoV-2 in the country through WGS.

The SOPs for epidemiological surveillance and response in the context of a new variant of the SARS-CoV-2 virus detected in the UK were disseminated to all the states as well as placed on the ministry’s website on December 22, 2020.

This page cannot be found

Specific genes in placenta may predict size of baby’s brain and...

Cough, cold and fever may not just be the flu. Here’s...