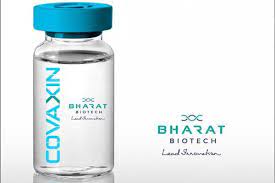 Bharat Biotech’s Covaxin manufacturing facility that is under construction in Kolar district in Karnataka would have a manufacturing capacity of four to five crore doses a month by August-end, state Health Minister Dr K Sudhakar said on Monday. Talking to reporters here ahead of his meeting with the experts on mucormycosis, known as as black fungus, which is emerging as a new threat to those who recover from COVID- 19, Sudhakar said he had a video conference with Bharat Biotech founder Dr Krishna Ella, his daughter Dr Jala Ella and rest of the team.

“Dr Ella has assured me that their facility at Malur in Kolar will be able to produce one crore vaccines by June-end. By July-end it will be by two to three crores, and their target by August-end is four crore to five crore vaccine doses,” Sudhakar said. According to him, Krishna Ella and all the directors assured him that they will give vaccines to Karnataka at the earliest. The minister said he asked them to provide a roll-out schedule as well, which they will do soon.

Karnataka officials will be in touch with them on how to roll out the vaccine in the state in the coming days. “Our priority is to get the vaccines to the people of our state at the earliest,” Sudhakar said. He also said that Bharat Biotech’s facility in Hyderabad can produce one crore doses of COVID vaccine a month whereas the Karnataka unit will roll out four to five crore doses a month from August onwards. To a question, Sudhakar said Chief Minister B S Yediyurappa would be holding a meeting in the evening where a detailed discussion will take place on the extension of lockdown following which a decision will be taken.

Replying to a query on the Congress questioning the Narendra Modi government at the Centre for allegedly selling the vaccines, Sudhakar said it was donated by the Centre to the COVID affected nations on humanitarian grounds as no one foresaw the severity of the second wave. He said it was highly regrettable that Congress was indulging in politics despite assuring the government that it will cooperate with it in the fight against COVID.

Karnataka has so far conducted 1.12 crore inoculations of coronavirus vaccines in the state comprising first and second doses whereas it has suspended the vaccination of people between the age group of 18 and 44, who are about 3.5 crore, due to shortage of vaccines. The state is battered by the second wave of COVID infections and reported 31,531 infections and 403 deaths on Sunday. There are over six lakh active cases in the state, a majority of whom are in Bengaluru.

Beyond secretion of insulin, the novel function of beta cells in...

Why we need to get creative when it comes to talking...