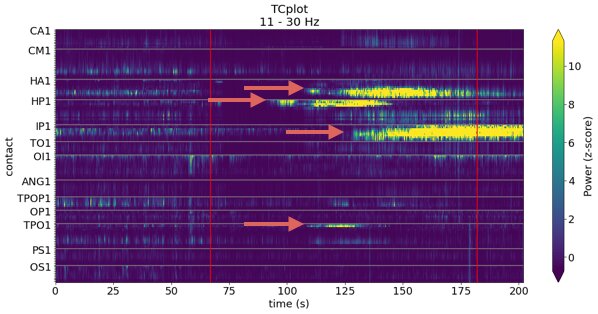 About 50 million people suffer from epilepsy in the world, one-third of whom do not respond to drug treatment. In many cases it is advisable to perform a surgical intervention on the point of the brain where seizures originate, but first the exact location must be found, which proves a complex and laborious task. In order to improve this process, two UPF researchers are developing the prototype of a new computer program called BrainFocus,which allows finding the epileptic focal point more accurately and more simply than conventional methods, saving up to 90% of the time.

The invention, which is protected by a patent, is the work of Manel Vila-Vidal and the co-supervisor of his doctoral thesis, Adrià Tauste Campo. Both are researchers with the Computational Neuroscience research group at the Center for Brain and Cognition (CBC).

To find the epileptic focus in patients resistant to medication they must be admitted for several days to monitor their brain’s electrical activity, especially during seizures. During their admission, through the implantation of up to 150 electrodes deep in the brain, neurologists obtain a huge amount of data that they currently have to check thoroughly to interpret where exactly each seizure originated, a task that requires many hours and a significant amount of training.

The BrainFocus program, however, automates the processing of these data quickly and accurately to identify the focus of the seizure. In addition, the software offers a graphic representation of the activity recorded by each implanted electrode so that physicians can consult highly detailed information at a glance and easily interpret it. These graphics allow neurologists to observe activity levels that are imperceptible using current procedures.

A tool adapted to clinical needs

In recent years, other methods have been developed to identify the epileptic focus, but neurologists often do not use them due to their complexity. The UPF researchers aim to avoid this problem so that their program can have a clinical impact: “We have seen that many developments in the field of neuroscience fail to reach society, but we want our tool to end up being useful,” Tauste explains.

To achieve this, Vila-Vidal believes that “it is very important that the tool should be adapted to the needs of the physicians that will use them, that it should display easily interpretable graphics and not force them to change their work protocols, rather facilitate them.”

To this end, the researchers have validated the algorithms on which BrainFocus is based with the help of physicians from the Epilepsy Monitoring Unit at Hospital Clínic. They have compared the results of BrainFocus with their own diagnoses of previously evaluated cases and their impressions have been most positive.

According to Dr. Antonio Donaire, coordinator of the EEG Epilepsy Monitoring Unit at Hospital Clinic, the program is “highly useful for finding the epileptic focus, a task that is by no means easy to perform accurately when you have to interpret hundreds of electrodes”.

“With the software, we were able to analyse data from six seizures in just 30 minutes, which until now was unthinkable,” adds Dr. Mariam alKhawaja, a fellow neurologist training in epilepsy with the same unit. Thus, neurologists calculate that, thanks to the program they can save up to 90% of the time spent reviewing data.

Dr. Donaire also highlights that the new software has been capable of finding information on the brain’s electrical activity in patients in whom it would have been “impossible to distinguish with the naked eye.” These advantages would be a “great help in planning surgery to treat drug-resistant epilepsy,” he assures.

Presentation at the main congress on epilepsy

To present BrainFocus to society, between 4 and 8 December its proponents participated at the Congress of the American Epilepsy Society, one of the most important events worldwide dealing with the disease. “We attended because it is the sector’s global showcase and we explained to industry representatives who we are, how the prototype we’ve made works, and why it is useful to physicians and patients,” Vila-Vidal sums up.

Over the coming months, the UPF researchers are planning to validate program changes with more users and obtain the necessary licenses to bring their invention to market within two years.

The researchers are developing the BrainFocus prototype thanks to funding obtained at the last call of the UPF INNOValora programme, which supports proof of concept tests related to applied research at UPF and is co-funded by the Generalitat (Government) of Catalonia and the European Regional Development Fund (ERDF).

Q And A: Treatments other than medication can be effective for drug-resistant epilepsy

Citation:
BrainFocus, a computer program to locate the source of epilepsy in the brain (2021, January 25)
retrieved 26 January 2021
from https://medicalxpress.com/news/2021-01-brainfocus-source-epilepsy-brain.html

What Is a Chromoendoscopy?