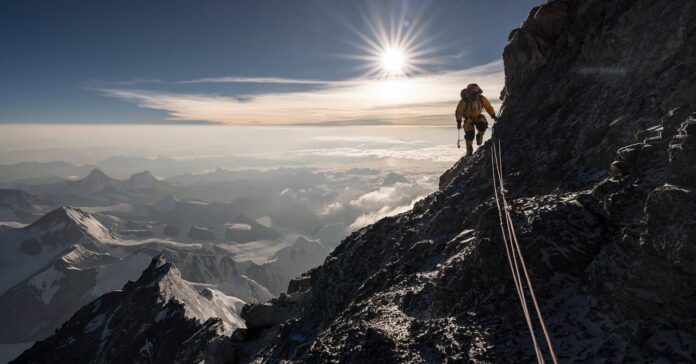 “What are these giant plates for?” I asked.

“No one here has any idea,” said Shaw. “We can only guess. This chamber is a Cold War baby. All we know is it was built for a big aerospace company.”

Shaw explained that within minutes he could depressurize the inside of this chamber to the equivalent atmospheric pressure of 85,000 feet above sea level and cool it down to –100 degrees Fahrenheit. The walls had to be solid steel a foot thick so the chamber wouldn’t implode. In other words, even though it was sitting on a concrete slab in Southern California, it could effectively mimic the conditions, at least in regards to temperature and atmospheric pressure, that the drone would face on Everest.

“By the way,” Shaw said, “I still don’t know what you guys are doing.”

“We want to fly a drone to the top of Mount Everest,” I told him.

As the pumps sucked air out of the chamber, a numeric display recording barometric pressure began ticking downward. Renan and I peered through the porthole over Rudy’s shoulder as he worked the joystick on the controller like a teenager going for his high score on Grand Theft Auto. The drone, hovering about 18 inches above the floor of the chamber, veered wildly from side to side and snapped against its tethers like an angry junkyard dog. When the ticker hit 11.61 inHg—the equivalent of 24,000 feet above sea level—the drone went into a death wobble and flipped upside down. The propellers hit the metal floor and blew apart, spraying chunks of black plastic into the air like shrapnel. The Inspire 2 lay twitching on its back like a wounded animal.

The test had taken only three or four minutes, but in that brief time Rudy had pushed the drone as hard as it would go. “As far as I could tell, it had plenty of thrust, which was the main thing I was worried about,” said Rudy.

“I’m not totally sure,” he replied.

The good news was that the drone had made it to 24,000 feet before it crashed. It was the highest Rudy and Renan had ever flown. The bad news was that the drone had only flown to 24,000 feet—4,000 feet below the height of the secret GPS coordinates where we hoped to find the long-lost remains of Sandy Irvine. And maybe, just maybe, an antique camera that could rewrite the history of the world’s tallest mountain.

From The Third Pole: Mystery, Obsession, and Death on Mount Everest by Mark Synnott with permission from Dutton, an imprint of the Penguin Publishing Group, a division of Penguin Random House, LLC. Copyright © 2021 by Mark Synnott.

If you buy something using links in our stories, we may earn a commission. This helps support our journalism. Learn more.

AHA News: Caregiving Is Never Easy, and COVID-19 Has Made It...