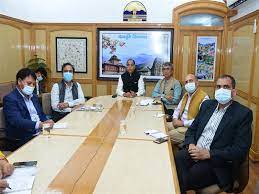 Every adult resident of Himachal Pradesh has got the first dose of his Covid vaccine and to commemorate this achievement, Prime Minister Narendra Modi will address the people of the hill state on September 6.

The state has attained the unique distinction of achieving the cent per cent target of the first dose of Covid vaccination for all residents of 18 years and above, Chief Minister Jai Ram Thakur said here in a statement on Tuesday.

Prime Minister Modi has congratulated the state government and agreed to digitally address the people of the state on September 6 and interact with some frontline workers, who have done exceptional work in achieving this target, he added.

Chief Minister Ram Thakur made the remark while presiding over a video meet in Shimla with all senior government officials across the state.

Thakur said as many as 90 LED screens would be installed at different parts of the state such as district, subdivision and block development headquarters besides other prominent places so that people could participate in this mega event.

Thakur said that health workers would also interact with Prime Minister Modi and share their views on making this vaccination campaign a success.

The CM also said the state government would provide vaccines to the few left out people of the Bara Bhangal area of Kangra district for which special sorties of state helicopter would be conducted.

While welcoming the chief minister, Himachal Chief Secretary Ram Subhag Singh directed the officers to ensure that all the left out people, if any, should be vaccinated by September 4 by launching a special campaign in this regard.

Singh said the state has also maintained a target of zero wastage of vaccines which also needs to be highlighted.

Late-life depression may be linked to gender expression

Research team creates a computer model that can predict how COVID-19...

Could Taking a Swing at Golf Help Parkinson’s Patients?

Want to travel during the pandemic? Here’s what to consider