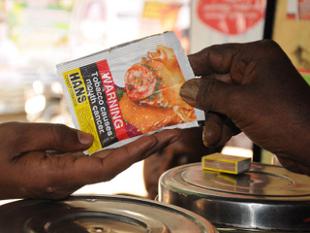 NEW DELHI: A majority of Indian television programmes depicting tobacco use are still broadcasted without anti-tobacco messages even though children and adolescents could be watching them, a new health ministry study has found. The study shows that implementation of the ‘Film Rule’ under the Cigarettes and Other Tobacco Products Act is very low, suggested a release by the ministry on Friday.

Over 20% of TV programs observed and coded for this study were found to depict tobacco and 71% of these programs were broadcast when children and adolescents may have been watching, according to the health ministry. “Implementation of ‘film rule’ was found to be very low,” the ministry stated.

The rule, implemented in 2012, mandates anti-tobacco health spots, audio visual disclaimers and static health warning messages to be broadcasted when tobacco products, branding or use are shown in films & television programs.

Anti-tobacco messages are effective in countering tobacco imagery and prompting the decision to quit, the ministry claimed in its release.

Researchers observed and coded over 400 hours of randomly selected TV programming across 45 channels and interviewed over 3,000 people to inform the findings in this report, according to the ministry.

“The tobacco industry spends billions of dollars to mislead consumers by depicting tobacco use as glamorous or popular. When tobacco is depicted in films and TV Programs, it’s doing the tobacco industry’s work for them,” stated Nandita Murukutia, Country Director, Vital Strategies, during a national stakeholder consultation on strengthening implementation of the Film Rule on Friday.

Tobacco kills one million Indians every year and costs India’s economy $22.4 billion, according to her.

“An effective way of tobacco control would be to ingrain and indoctrinate the young minds, the children and the youth,” stated health secretary CK Mishra during this consultation.

Ajay Mittal, Secretary, Ministry of Information and Broadcasting, added that tobacco sellers should warn the customers about the ill effects of tobacco.

Health Tips People Suffering From Dry Skin Problem Should Not Use...