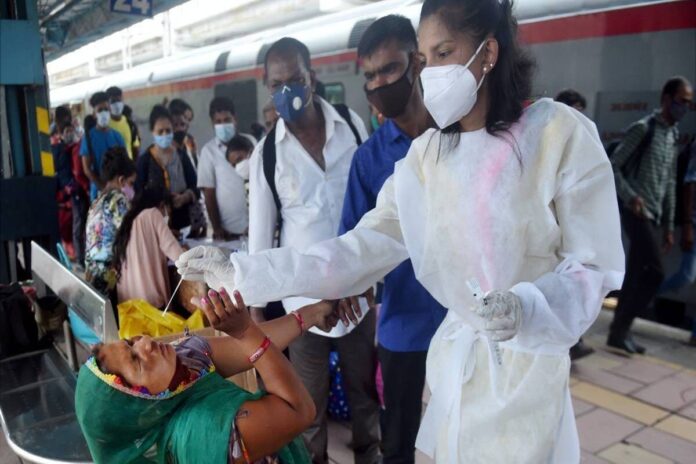 India recorded a single-day rise of 3,998 coronavirus fatalities as Maharashtra carried out its 14th Covid data reconciliation exercise, pushing the country’s death toll to 4,18,480, according to the Union Health Ministry data updated on Wednesday. The country recorded 42,015 new cases taking the total tally to 3,12,16,337.

The ministry said Maharashtra has carried out reconciliation exercise of Covid data following which the state’s positive case tally has increased by 2,479 while the death tally has increased by 3,509. The active cases in the country have increased to 4,07,170 and comprise 1.30 per cent of the total infections, while the national COVID-19 recovery rate was recorded at 97.36 per cent,the data updated at 8 am showed.

An increase of 1,040 cases has been recorded in the active COVID-19 caseload in a span of 24 hours. As many as 18,52,140 tests were conducted on Tuesday taking the total cumulative tests conducted so far for detection of COVID-19 in the country to 44,91,93,273, while the daily positivity rate was recorded at 2.27 per cent. It has been less than three per cent for 30 consecutive days, the ministry said, adding the weekly positivity rate was recorded at 2.09 per cent. The number of people who have recuperated from the disease surged to 3,03,90,687 and the case fatality rate has increased to 1.34 per cent, the data stated. Cumulative vaccine doses administered so far has reached 41.54 crore under the nationwide vaccination drive.

A total of 4,18,480 deaths have been reported so far in the country including 1,30,753 from Maharashtra, 36,226 from Karnataka, 33,782 from Tamil Nadu, 25,035 from Delhi, 22,737 from Uttar Pradesh, 18,021 from West Bengal and 16,244 from Punjab. The ministry stressed that more than 70 per cent of the deaths occurred due to comorbidities. “Our figures are being reconciled with the Indian Council of Medical Research,” the ministry said on its website, adding that state-wise distribution of figures is subject to further verification and reconciliation.

Americans Are Cutting Back on Sugary Drinks

Pakistan is the riskiest country for newborns: UNICEF report

All India Institute of Ayurveda,New Delhi –