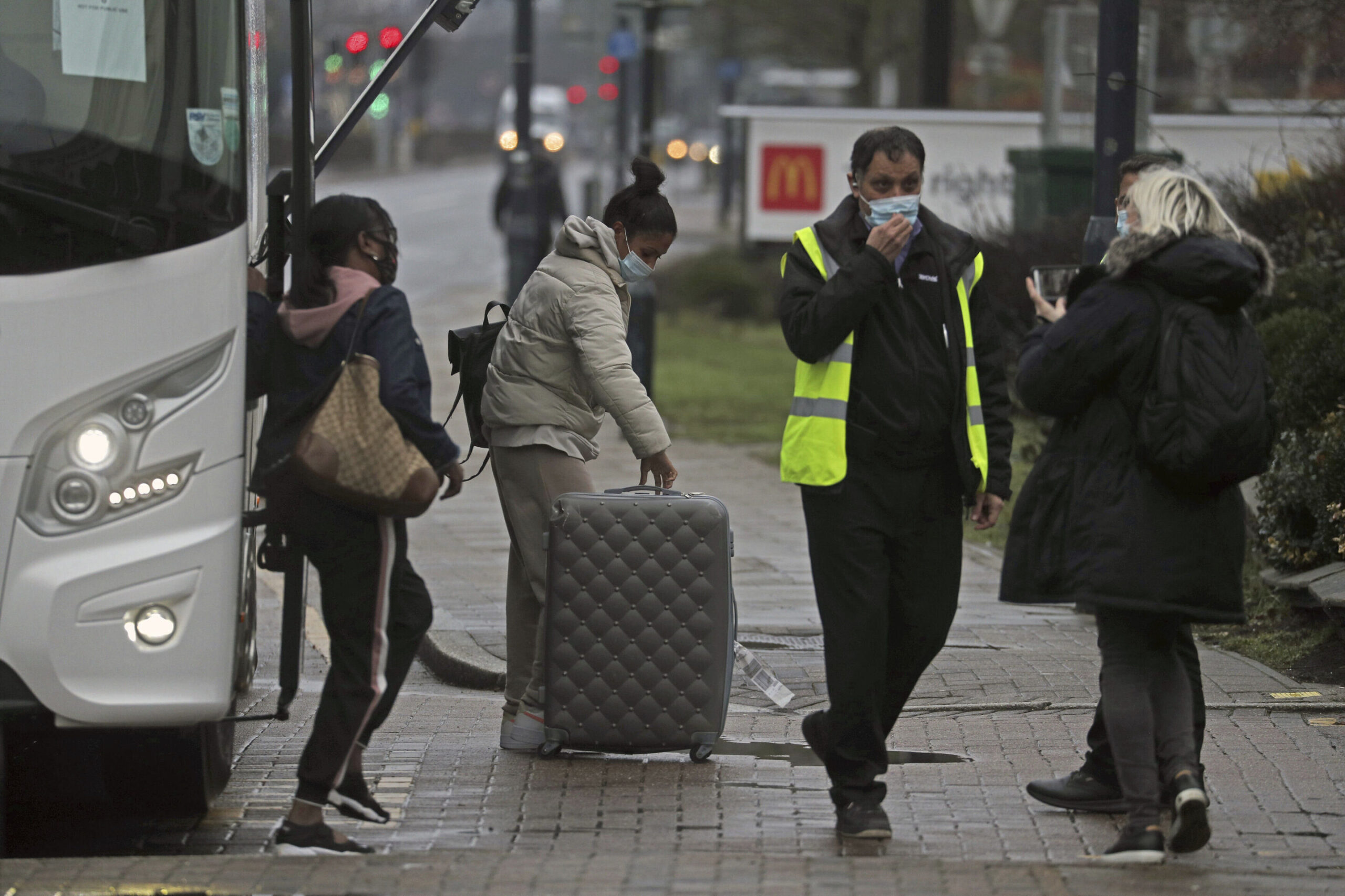 Passengers arriving at London’s Heathrow Airport were escorted by security guards to buses that took them to nearby hotels.

Some of the travelers said they had tried and failed to make it to Britain before Monday to avoid the quarantine.

Zari Tadayon, who flew to Heathrow from Dubai and was taken to the Radisson Blu Edwardian hotel near the airport, said she had hoped she would be allowed to quarantine at her home in London. She said she felt “horrible” about the enforced 10-day hotel stay.

Britain has given a first dose of coronavirus vaccine to over 15 million people, almost a quarter of its population, but health officials are concerned that vaccines may not work as well on some new strains of the virus, including one first identified in South Africa.

Under the new rules, residents of the U.K. and Ireland arriving in England from 33 high-risk countries must stay in designated hotels for 10 days at their own expense, with meals delivered to their door. In Scotland the rule applies to arrivals from any country.

International travel has already been sharply curbed by the pandemic and Britons are currently barred from going on overseas vacations.

Critics, however, say Britain’s quarantine hotels are being set up too late, with the South African variant already circulating in the U.K.

On Sunday, the Conservative government reached its goal of giving the first of two doses of vaccine to 15 million of Britain’s most vulnerable people, including health care workers and those aged over 70.

Health Secretary Matt Hancock said the vaccination drive is now being extended to people over 65 and those with underlying health conditions. The government aims to give everyone over 50 their first vaccine shot by the end of April and vaccinate the whole adult population by September.

Britain has had Europe’s worst coronavirus outbreak, with more than 117,000 deaths. Infections and deaths are now falling steadily, and the government says on Feb. 22 it will announce a “road map” for easing a nationwide lockdown.

Johnson is under pressure from some members of his governing Conservative Party to lift the lockdown soon, allowing businesses to reopen and people to visit friends and family.

The prime minister, who has been accused of being too slow to lock Britain down last spring, then too quick to ease restrictions over the summer, now is striking a more measured tone.

“We’ve got to be very prudent,” he said, adding that the steps announced next week would be “cautious but irreversible.”

Epidemiologist Neil Ferguson, who advises the government on respiratory viruses, said officials were right to be cautious.

“The thing we don’t want to repeat is what has happened on previous occasions—namely relaxing too fast,” he told “Good Morning Britain.”

In Jammu Kashmir Schools For Students Till 9th Class Closed For...

Medication access for opioid use disorder lower among those involved with...

Some COVID-19 patients face a long haul that can last for...