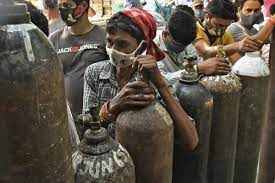 The state had sanctioned the construction of 555 oxygen plants during the second Covid-19 wave. The government is working on a war-footing to operationalise the remaining plants ahead of a predicted third Covid-19 wave.

The Uttar Pradesh government is shoring up medical resources and equipping hospitals in the state with adequate facilities to handle a third Covid-19 wave.

The government has made oxygen plants mandatory at hospitals with more than 50 beds. The chief minister has also directed officials to assess the situation and take any necessary action.

The state government is also monitoring the implementation of the plants considering the significant role liquid medical oxygen plays in the treatment of Covid-19.

Adityanath only recently admitted to the shortage of oxygen during the second wave. In April, the Uttar Pradesh chief minister had vehemently denied that there was any oxygen crisis at any of the state’s private or public hospitals.

He made the admission while speaking to doctors in Agra. Adityanath said the government did notice a shortage in medical oxygen supply during the second Covid-19 wave. He added resources usually fell short during a pandemic and said Covid-19 is the century’s largest pandemic.

However, Adityanath said the government also worked on a war footing to ensure supply of oxygen cylinders to every district.

Omicron found in 95 per cent of samples in Mumbai

SBI, PNB, BoB may go for share sale this fiscal