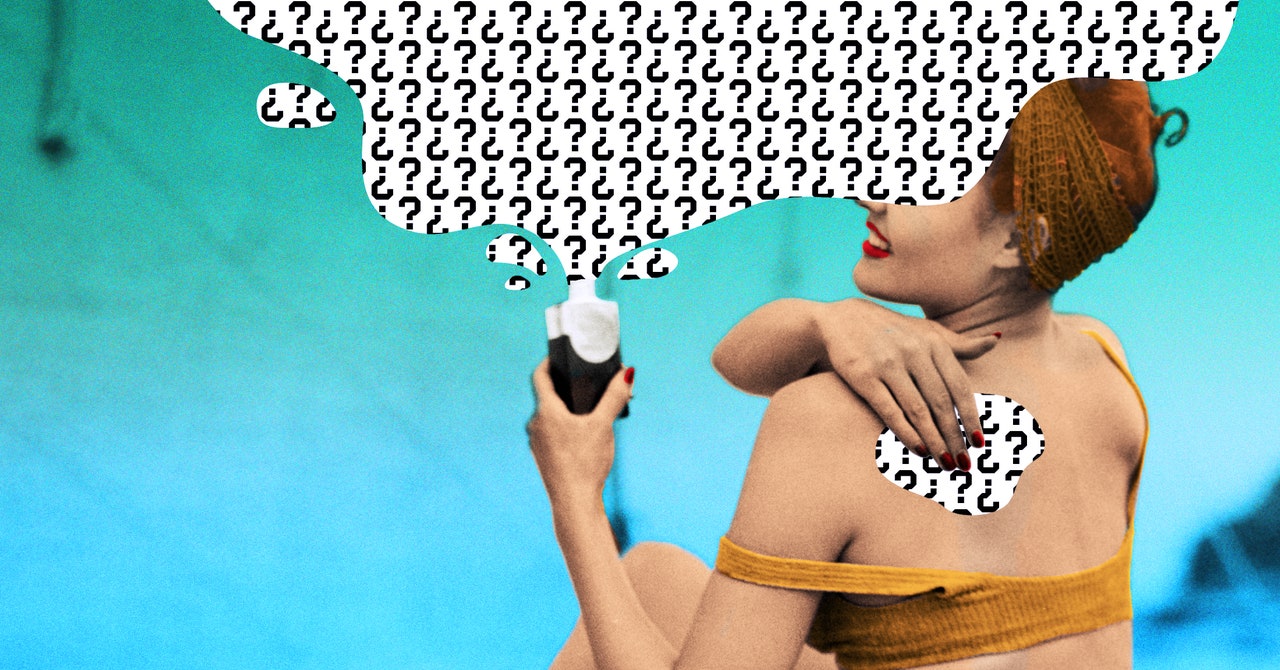 But the picture is a little muddier when it comes to skin cancer.

We absolutely know that the sun causes skin cancer. The question is whether using sunscreen protects against it. Intuitively, it seems like it would: we know it absorbs sunburn-causing ultraviolet photons. But as cancer researcher John DiGiovanna says, “Sunscreen isn’t a suit of armor. It can be overcome by too much sun.” Unless you’re submerged in a pool of sunscreen, some solar photons will absolutely get through to your skin; that’s one reason the FDA doesn’t allow manufacturers to use the word “sunblock.” But there’s also this:

That’s a mouthful. Let’s break it down.

In Copenhagen in 1932, at the Second International Congress of Light—which sounds like some sort of Illuminati gathering—a bunch of physicists got drunk and created arbitrary divisions within ultraviolet light. You’ve almost certainly seen these arbitrary divisions before: they’re called UVA and UVB, and maybe your dermatologist explained them to you roughly like this:

UVB CAUSES SUNBURN (AND SOME CANCERS).

UVA CAUSES WRINKLING (AND SOME CANCERS).

This is not exactly true, but a perfectly fine simplification for our purposes. Early sunscreens absorbed UVB photons very well and absorbed UVA photons . . . not so well. You might call these sunscreens “narrow spectrum.” And narrow spectrum works great for shielding against sunburn-causing UVB photons, but to protect against a fuller range of the sun’s photonic assault you also need to absorb UVA photons. Hence the “broad spectrum” on the label.

The FDA allows any sunscreen that has an SPF of 15 or higher that also passes its broad-spectrum test to say that it “decreases the risk of skin cancer . . . caused by the sun.” What’s the evidence for that claim?

It’s kind of embarrassing to admit this, but so far there appears to have been only one randomized controlled trial that tested whether sunscreen could reduce the risk of skin cancer, and that trial was mostly focused on non-melanoma skin cancers. It found that sunscreen didn’t change the number of people who got squamous or basal cell carcinomas, but it did reduce the number of squamous cell carcinoma tumors diagnosed per person. This is not exactly the type of ironclad evidence you’d hope for, though I will point out two factors in this trial’s defense. First, it was conducted in the 1990s, which means it used pretty old sunscreen technology. If we redid the trial with modern sunscreens, we would expect a more dramatic result. Second, the control group in the trial was not prevented from using sunscreen; that would have been unethical. They were allowed to use sunscreen, but they used less than the full‑on‑sunscreen group. If people in the control group had been prevented from using sunscreen, we would also expect a more dramatic result.5

5. In this particular case, a more dramatic result would have been people in the control group getting a lot more cancer. This would have been bad experimental design on many fronts: First and most obviously, preventing people from using something that might reduce their risk of cancer is unethical. Second, it would have made the trial results look better, but more people might have ended up with cancer than if there had been no trial. And third, it wouldn’t have changed the sunscreen’s actual effectiveness; all it would have done was made it look better by comparison.

What about melanoma? Again, the evidence here is . . . less than ideal. The only randomized controlled trial on melanoma in adults was actually a continuation of the trial we just talked about. Both this trial and a couple of cohort studies suggest that sunscreen does have a protective effect.

Data on melanoma rates reveals a bit of a paradox: even though lots of white people throughout the world use sunscreen, melanoma rates have not gone down or even stayed flat. In fact, over the past thirty years, they’ve nearly tripled. If sunscreen protects against skin cancer, why are melanoma rates rising?

But there’s another hypothesis. It was advanced by a Belgian epidemiologist named Philippe Autier, and although it’s supported by two (small) randomized controlled trials he’s helped conduct, it remains controversial. Autier believes that sunscreen use among white people who like to sunbathe actually increases total UV exposure, which could lead to melanoma. His thinking goes like this: White people like to intentionally expose themselves to the sun to get a tan, but they don’t like to burn. So they buy ultra-high-SPF sunscreen, which effectively absorbs most of the photons that cause sunburn. But because they’re not getting sunburned, these white people stay out in the sun much longer than their bodies would otherwise let them.

Basically, Autier believes that sunscreen lets you circumvent your biochemical “GTFO of the sun!” alert, thus allowing you to overdose on sun exposure. In a 2011 paper, he went so far as to say that the recommendation to reapply sunscreen—which is required by law in the United States—“probably represents a form of abuse.”

If You Drink Too Much Soda Then Be Careful, This Serious...