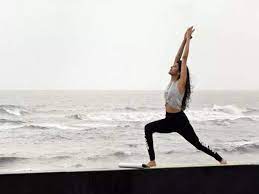 The Union Ayush Ministry has introduced a mobile app that will help working professional de-stress and realign their focus at the workplace, increasing their productivity. The app’s five-minute protocol includes dhyana, asanas, and pranayama, PTI reported.

Union Ayush Minister Sarbanand Sonowal, speaking on yoga and its benefits during the launch, said the nature of their occupation often left corporate professionals stressed and also cause physical problems. The app — Yoga Break — has been developed to bring them some solace at the workplace.

The philosophy behind yoga has influenced various aspects of Indian society — health, medicine, education, and arts, he said.

Singh appreciated using technology to promote yoga and urged Rijiju to enact a law that would allow people five minutes for yoga at the workplace.

Rijiju, on the other hand, hailed the ministry’s simple ways in propagating yoga and said he was certain that the app would be a huge hit.

Delhi MP Lekhi said the app could be a big contributor in reducing stress.

The app’s launch was part of the Centre’s ‘Azadi Ka Amrit Mahotsav’ event to celebrate India’s 75th year of Independence.

The Union Ayush Ministry has been allocated time between August 30 and September 5 to promote its various activities, such as the app, organising school camps for Ayush systems, and distribution of medicinal plants for the public and farmers.

Kalubhai said a lot of research had gone into the app. Robust trials had tested its deliverables, while its impact on human cells has also been talked about.

The ministry had launched the module as a pilot project in January 2020 in six major metros. The Morarji Desai National Institute of Yoga, in collaboration with the country’s six leading yoga institutes, conducted a 15-day trial for the app with 717 participants.

Weight loss: The best time to eat dinner to shed that...

How pregnancy turns the stress response on its head